As the National League South returned to action this afternoon, the 1,305 supporters paid their respects with a minute’s silence for lifetime Dartford fan and volunteer Bill Newland, who’s sudden passing shocked all those who knew him. Bill was the perfect example of a football fan, gentleman and friend. He will be sadly missed by many but he’d be delighted with the current form of his beloved Darts.

The Darts launched an excellent attack as early as the fifth minute, and the ball ended up at the feet of the lively Danny Leonard, who sent a wonderful curling drive narrowly over Luke Cairney’s crossbar after seeing his initial shot blocked. The Dartford number seven was at it again three minutes later, as he tore past the defender to send in an exquisite cross into the path of Luke Allen. Unfortunately, the latter just couldn’t reach it in time and Hungerford eventually cleared the danger. The game was quite even at this stage, but the visitors rarely threatened goalkeeper Dan Wilks. In fact, it took until the nineteenth minute before any noteworthy opportunity was created, but Rhys Tyler could only watch as his strike flew over Wilks’ crossbar after a good attack.

With temperatures beginning to rise, both on and off the pitch, the hosts then exploded into life after being awarded a free-kick in a dangerous position with 34 minutes on the clock. Jack Jebb sent a wicked ball into the box where Josh Hill connected with it, only to see Cairney pull off a terrific save. Three minutes later saw Cairney prevent Hill from opening the scoring again with another good stop, the big defender having gotten on the end of Jebb’s corner on this occasion. Hungerford's goalkeeper saved George Porter’s 41st minute effort, before the referee, Alex Blake, threatened to lose control of proceedings. As frustrations began boiling over, Mr Blake appeared to be oblivious to a dangerous Hungerford challenge on the far side of the pitch, only to then award the visitors a free-kick, sparking outrage from the Dartford faithful. As things boiled over, Kyle Bailey saw yellow for a late challenge (42), before Luke Allen got booked on the stroke of half-time.

The Darts came out in the second-half and got a firm grip on the game, as they began to dominate. Danny Leonard started things off when his 50th minute strike was blocked, before the excellent Noor Husin went into the referee’s book on the hour for being a little too vocal apparently…! And, just when the visitors decided to roam forward, Dartford hit them with a swift counter-attack via Danny Leonard. He raced forward before sending a sweet ball towards Ade Azeez, who gracefully smashed the ball home to break the deadlock and score his eleventh goal of the season (63').
Manager, Steve King, then substituted Dan Roberts for George Porter a minute later, before Leonard was ploughing forward again. This time he set up Luke Allen with a great cross, only to witness the midfielder’s drive cannon back off the crossbar (66).
The Darts were in full control with fifteen minutes remaining, and would go on to create numerous chances. However, the best fell to Emmanuel Sonupe (who’d replaced Jack Jebb on 74 minutes), who saw his 83rd minute effort excellently saved by Cairney first, before the goalkeeper saved well from Dan Roberts late on. The last remaining substitution available saw Deshane Dalling come on for Ade Azeez with six minutes remaining, as the hosts controlled the game to clinch the three points. The result sees Dartford stretch their lead at the top of the National League South table to five points, while remaining unbeaten in eleven games in all competitions. Bill Newland would certainly be proud. 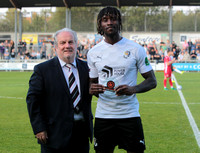 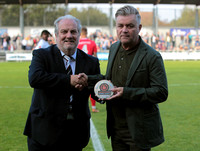 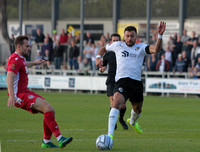 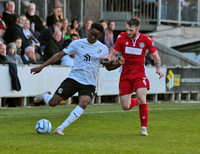 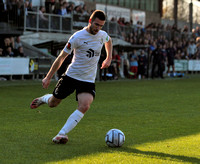 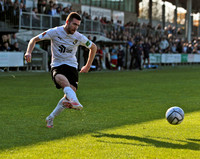 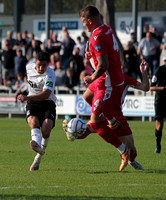