Created 1-Mar-20
100 photos
29 February 2020. Storm Jorge blustered past just after the start of the second half, soaking all in what could be described as an ice bucket challenge. The whole match was a bit stressful to me for the NLP, not least because Steve Kennedy doing the editorial told me it was meant for the centre spot.
A match against a team deservedly at the top of the league. Dartford held them to a 0:0 draw. The Darts searched for a first home win against League Leaders Wealdstone since the early nineties. Dartford have won just two of their previous 15 meetings against Wealdstone since their last home victory against them in 1991, in that time they have drawn five of their last seven when hosting this weekend’s opponents. A difficult task awaits Steve King’s side when they take on a side who convincingly defeated the Darts on the opening day of this season. Mark Smith, Josh Hill, Tom Bonner and Luke Wanadio are the only four players to have started in the opening day defeat and have made over 20 appearances this season. Ross Lafayette’s brace book ended Josh Hill’s equaliser, a Dennon Lewis deflection and a goal by Connor Stevens. However, plenty has changed at Princes Park since the 4-1 reverse at Grosvenor Vale, a new manager and playing style as well as wholesale changes to the squad has seen the Darts climb the National South ladder. Meanwhile, Wealdstone have looked down at the rest of the league occupying top spot for the majority of the season.

Lots of supporters from both sides singing and chanting and making lots of noise. Great atmosphere.

78' Wealdstone under pressure and a big penalty shout! The Ref gave it to Wealdstone and Billy Crook booked. Dennon Lewis stepped up to take it for Wealdstone.... And missed!! Hit the post and went wide. Poor penalty, but a reprieve for Dartford. 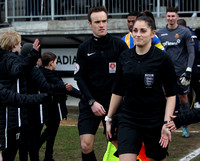