Dartford hosted newly promoted League Two side Sutton United at Bericote Powerhouse Princes Park on a glorious summer evening in front of 677 supporters.
The Darts, which included defender Ronnie Vint in the starting eleven, burst out of the blocks, and could have been ahead within seven minutes. The attack came from the host’s left-flank via the lively Trialist #11, who sent a good ball across the face of Dean Bouzanis’ goal. Jake Robinson arrived in the nick of time, but could only watch as his effort flew over the crossbar.

The Dartford number nine was a constant threat to the Sutton United defence, and had another effort on goal in the twelfth minute. Unfortunately, his strike from distance was easily collected by Bouzanis. However, proving to be too hot to handle, Robinson was alive in the box once again, only to be fouled by a defender. The referee, Tim Robinson, awarded the penalty, and Robinson obliged to tuck the ball beyond Bouzanis to open the scoring (15). With both flank combinations of Trialist #2 and Danny Leonard, plus Jernade Meade and Trialist #11, the hosts were always a threat going forward, as they threatened to overlap the visitors regularly. Yet, the fullbacks also looked confident in their defensive areas as well, none more so than Jernade Meade. He was certainly winning the battle against Sutton’s David Ajiboye, and yet both were involved in a controversial decision in the 28th minute. As both players arrived near the corner-flag, Ajiboye blatantly pulled Meade back, only for the linesman to bizarrely award the free-kick to the visitors! Thankfully, the free-kick was headed wide of Craig King’s post seconds later. Undeterred, the visitors continued pressing forward as they searched for the equaliser. And the combination of Craig King and Josh Hill prevented them from doing so with thirty-seven minutes played. Having been awarded a corner, which was whipped into the Dartford danger area, Richie Bennett got on the end of the ball to force King into a good save. However, the ball was still loose, and only a crucial block from Hill stopped Sutton from pulling level before the break.
Once again, the Darts raced forward when in possession and could have stretched their lead, as first Kieran Murtagh’s drive was blocked by the U’s defence (43), and then Danny Leonard’s effort was saved by Bouzanis (45).

The second forty-five burst into life immediately, as both sides created opportunities in a period of end-to-end football. Trialist #11 was enjoying himself out on the pitch, as he tormented his opponent before seeking out Jake Robinson with a great ball. Unfortunately, Robinson couldn’t quite find the target on this occasion (50). Neither could Joel Kizzi for Sutton, as he sent a header over the top of King’s crossbar two minutes later. Kizzi would surely rue that miss because his side found themselves 2-0 down after 55 minutes. Once again, it was the pace on the flanks that undid the League Two side. Danny Leonard showed the crowd his skill with some excellent play, before clipping the ball into the box and finding Trialist #11. He controlled the ball, setting up Luke Allen perfectly, who rifled in a half-volley which left Dean Bouzanis helpless. The Impressive Leonard was at it again in the 62nd minute, when he received the ball before making his way towards the Sutton box. Reaching the area, he subsequently took on the shot himself, which was heading for the top corner, only for Bouzanis to jump high enough to collect safely.

With this being a friendly game, the expected changes in personnel would begin after halfway through the second-half, as Steve King looked to bring on fresh pairs of legs. Noor Husin and Dan Roberts would replace Kieran Murtagh and Jake Robinson (67), before Jack Jebb replaced Luke Allen (71), Connor Essam replaced Ronnie Vint (73), Tom Bonner replaced Josh Hill (76), and Alfie Evans came on for George Porter (80). In between those substitutions, however, the Princes Park faithful were treated to two further goals. The first of which arrived in the 68th minute via the visitors and a little fortune. The attack came via Sutton’s left, and it was Harry Beautyman who forced an excellent save out of Craig King. Unfortunately, the goalkeeper couldn’t keep the ball safe and Killian Kouassi was able to stick it home to pull his team back into the game…or so he thought…! As King launched the ball long, Trialist #11 collected it before playing a brilliant one-two with Jebb. The former then found Dan Roberts with a beautiful delivery, and Roberts controlled the ball before sending it beyond Bouzanis and into the back of the net (74). Goalkeeper King would be called into action once again, as he saved a Craig Eastmond effort excellently with twelve minutes remaining, after which the game calmed down as the clock ticked towards the 90th minute. 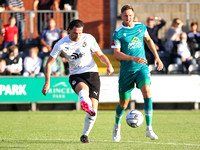 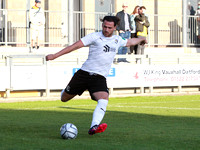