A missed penalty proved crucial as Dartford were held to a draw at home by Havant in National League South. Considering other results in the National League South this Saturday, a point keeps the Darts in the hunt for top spot and automatic promotion. The result also preserves the impressive unbeaten record at Fortress Bericote Powerhouse Princes Park.

To say that the visitors, Havant and Waterlooville, were physical would be an understatement. But, what was more concerning was the fact that the referee, Mr Callum Walchester, was far too lenient towards the physicality and obvious fouls inflicted upon the Dartford players. Forward, Alex Wall, grabbed the attention of many with his foul play, yet not the attention of the man in the middle or his assistants it would appear.

Ade Azeez saw his spot-kick saved before the break as Darts missed a chance to make up ground on the two teams above them in the title race. A strong wind going straight down the pitch played a key role in the game against a combative Havant side who always posed a threat in the air. But the football was not of any real quality, the fact that the ball went out of the ground eight times in the first half underlined how stop-start an affair it proved to be. Dartford had the first chance as early as the third minute but Connor Essam lacked power at the far post from a deep Jack Jebb corner.

Havant thought they’d taken the lead on 16 minutes. Good work by Billy Clifford saw his right-wing cross headed down by Manny Duku for Stefan Payne to convert at close range, but the offside flag cut short their celebrations. Darts went ahead on 27 minutes, another excellent delivery by Jebb found Kory Roberts at the far post and he headed back across goal beyond the reach of keeper Ross Worner for his first Dartford goal. The Darts lost George Porter to injury on the half-hour, and quickly lost their lead when Havant levelled on 33 minutes, Alex Wall turning the ball home following a left-wing delivery against his former club. Wall, who escaped without a card for an earlier robust challenge, went into the book for a foul on Connor Essam.

Substitute Kristian Campbell, on for his debut after signing from Welling, almost created a chance for Marcus Dinanga as he drove through the heart of the away defence but Joe Newton prevented a clear sight of goal. Darts had a glorious chance to go ahead four minutes before the break when Azeez turned his man on the edge of the box and was fouled by Benny Read as he lined up a shot at goal. Referee Callum Walchester opted not to show a card of any colour, but did point to the spot. Azeez stepped forward but Worner dived to his right to make an excellent save to keep his side on level terms. There was still time for Azeez to head wide a Jebb free-kick in stoppage time.

Darts were playing with the wind after the break but Havant changed their shape and the home side never really got to grips with it. Tommy Wright shot wide for the visitors while Campbell missed a free header six yards out from Jebb’s corner at the other end. Darts boss Steve King was bizarrely booked for clapping the assistant referee for giving a throw-in to his team on 64 minutes.

It needed a stunning one-handed save by Darts keeper Dan Wilks to deny Havant two minutes later, as Wright looked certain to convert Wall’s early right-wing cross.
Dartford were being restricted to set plays, Jebb’s quality on the ball creating openings despite Havant having a clear height advantage. Darts captain Tom Bonner went into the book 10 minutes from time for a foul on the edge of the box on Havant substitute James Roberts. A training ground move on the dead ball ended with Wall shooting harmlessly wide. 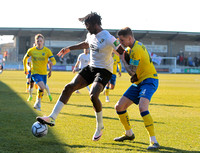 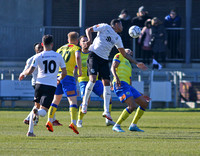 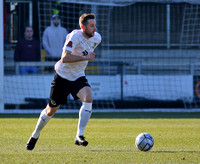 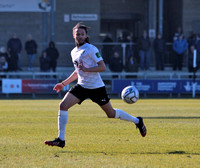 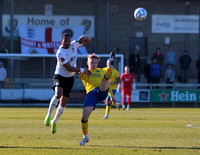 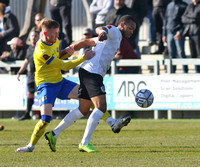 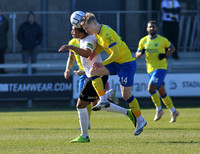