Steve King turned to newly signed striker Femi Akinwande to change Dartford's goal scoring fortunes. The twenty-four year old former Dartford Academy player arrived in midweek from Stevenage Borough to help his new team until the end of the season, and it was no surprise to see him named in the starting eleven. With the current pandemic dictating everything these days, this was Dartford’s first trip on the road since falling to a 3-1 defeat at Eastbourne Borough at the beginning of December. Unfortunately, the next ninety minutes would prove to be as equally unrewarding, as the hosts began the first half strongly. However, the visitors were presented with one of the better opportunities during the opening exchanges, when a good move forced the foul from Braintree in the 8th minute. Jack Jebb delivered a good ball, but the defence was able to clear the danger. Four minutes later saw debutant Femi Akinwande hold up the ball well, before being clipped and earning his new team another free-kick. Once again, Jebb sent the ball forward and, once again, the defence cleared it with ease. Things were looking positive during this stage of the game, as the visitors passed the ball quite well and an excellent run from Nassim L’Ghoul resulted in him being floored by two Braintree defenders. The referee decided that Taofiqol Omowewe’s challenge was illegal and showed him a yellow card. Jebb took the free-kick, but sent the ball straight into goalkeeper Samuel Johnson’s hands. With 26 minutes on the clock, Steve King’s side looked in charge, as they passed the ball before opening up an attack down the right flank. The ball was passed into the box perfectly, but unfortunately, the expected strike sent it wide of Jonhson’s upright. And then the game turned on its head…

Braintree launched an attack down their left flank, before sending a dangerous ball into the Dartford box. It eventually found the feet of Percy Kiangebeni, who stuck towards goal. Despite the best efforts of a defender, the ball managed to squeeze its way beyond Ethan Wady and into the back of the net (29). Dartford retaliated five minutes later and Ky Marsh-Brown earned another free-kick. Jebb delivered and the ball eventually found the feet of Jacob Berkeley-Agyepong, but his shot was blocked and eventually cleared by the hosts. Dartford would have had every right to feel slightly unlucky at being a goal down at half-time, and they started the second forty-five with the intention of pulling the score level. Nassim L’Ghoul was a threat from the off, and found himself in an excellent position within two minutes. Sadly, his effort found Samuel Johnson’s arms with ease. Another free-kick was awarded in Dartford’s favour in the 49th minute, but Jebb couldn’t direct his strike beyond the wall of Braintree players. Proceedings then took a massive twist. First, Captain Tom Bonner was booked for a late challenge (54), then Braintree doubled their lead (60). The goal came from a free-kick, which appeared to be covered by Ethan Wady. However, Taofiqol Omowewe managed to get on the end of the ball to double his side’s lead and, subsequently, knock the stuffing out of the Darts! Steve King reacted immediately, sending on striker Chris Dickson for Ky Marsh-Brown in the 61st minute, and the substitute came close to pulling a goal back six minutes later. His effort was saved by Johnson instead, and then eventually cleared to safety. This lit a spark in the visitors, as they searched for a goal. Their efforts were rewarded with three successive corners from the 70th minute onwards, the last of which resulted in a brilliant header which flew just wide of Johnson’s post.
As the Darts pressed forward to salvage something from the game, they were always open to the counter-attack, and were caught short in a frantic period of play with twelve minutes remaining. As the hosts drove forward with pace, Jazzi Barnum-Bobb committed himself to make the foul, and was shown the red card for his efforts. The free-kick was sent straight over Wady’s crossbar, and the goalkeeper reacted quickly by launching his teammates forward once again. They broke into the Braintree penalty area, forcing the foul and earning a penalty, for which Dickson took the responsibility, and the striker sent the ball beyond Johnson to score his third goal of the season and pull his side back into this encounter. Having been gifted a way back into the game, the Darts threw men forward in an attempt to rescue a point. But Braintree threw everything they had left in the tank to help preserve their slender lead. Samuel Johnson saved an excellent drive deep into stoppage time, the rebound of which was desperately cleared out to safety, as the visitor’s efforts ended in vain. In all honesty, this wasn’t the best performance from Steve King’s men, and the team will be disappointed at falling to a fourth league defeat of the season. The only consolation from today will be that other results in the National League South mean that the Darts remain in contention, as they sit in second place in the table.
TEAMS
BRAINTREE TOWN: Samuel Johnson, Sam Robbins, Nathan Smith, Matthew Johnson, Taofiqol Omowewe, Ryan Henshaw, John Villerenee, Jack Thomas, Thomas Derry, Percy Kiangebeni, Correy Davidson.
SUBSTITUTES: Marcus Johnson-Schuster, Reece Prestedge, Ken Charles, Frances Amartey, Adam Yusuf.
DARTFORD: Ethan Wady, Jazzi Barnum-Bobb, Craig Braham-Barrett, Noor Husin, Connor Essam, Tom Bonner ©, Ky Marsh-Brown, Jack Jebb, Femi Akinwande, Jacob Berkeley-Agyepong, Nassim L’Ghoul.
SUBSTITUTES: Josh Hill, David Ijaha, Elliott Romain, Chris Dickson, Luke Allen.
By Chris Palmer 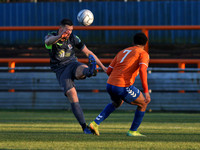 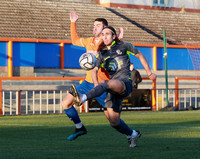 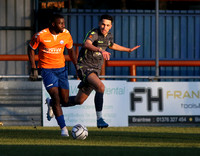 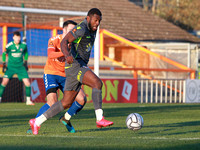 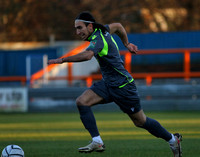