Dartford’s unbeaten run continued, as they put four goals past an in-form Braintree Town in front of 1,028 supporters at Bericote Powerhouse Princes Park on a cold and wet Saturday afternoon. After an excellently observed two-minute silence in honour of those in the Armed Forces the referee, Mr Ben Atkinson, got the first forty-five underway. However, there was very little goalmouth action in the first half.

The second-half was an entirely different affair and, as the hosts launched an attack down their right-flank, Mr Atkinson awarded them an opportunity to take the lead after Pierre Fonkeu was fouled inside the Braintree box. Up stepped Charlie Sheringham to convert the penalty to give the Darts the lead (50). The visitors responded immediately and were eventually awarded a corner, but the resulting shot ricocheted off of another Braintree player and flew high over the top of Joe Young’s crossbar (53). The goal had opened up the pitch more, as the visitors had to come forward, and it wasn’t long before goalkeeper Jack Sims was called into action at the other end… as he managed to parry Luke Coulson’s 61st minute drive before the follow-up was deemed to be offside.

Some might forgive Braintree for thinking that they had a way back into the game a minute later, after Dartford captain Tom Bonner was shown a second yellow card, followed by a red, after a seemingly 50/50 challenge with Matthew Rush (62). Regardless of the circumstances, Bonner was off, and the Darts faced the prospect of defending for their lives with an 11-man Braintree. The brilliant Luke Coulson (who received a worthy Man of The Match award) had other ideas. As the hosts attacked via the right-flank once again, he received the ball before sending a delightful long-range strike which left Sims with absolutely no chance of reaching, let alone saving (68). Ironically, the Iron speeded up their game from then on as they tried to get back into the game. And, after 74 minutes an opportunity materialised after an attack on their right-side ended with a terrific ball towards the middle… only for Coulson to pull off a fantastic interception which prevented them from testing Joe Young between the sticks. Coulson then played a neat one-two with Charlie Sheringham before winning a throw-in deep inside the opposition half. The Iron pulled themselves back into the game after Kyran Clements’ bullet header from a corner halved the deficit in the 79th minute.

Alan Dowson responded with a double substitution, exchanging Alex Wall and Samir Carruthers for Charlie Sheringham and Luke Coulson (80), before Keiran Murtagh came on for Josh Johnson six minutes later. It was the Dartford changes that influenced the game more… particularly Samir Carruthers. As the game entered the 90th minute, Keiran Murtagh saw his effort put behind for a corner. The set-piece then found Carruthers inside the box, who simply wasn’t going to miss from such a range! However, the midfielder wasn’t quite finished yet. To add insult to Braintree’s injury, a Dartford attack deep into stoppage time saw the defence fail to hold station and the hosts were awarded their second penalty of the afternoon. Up stepped Carruthers to smash the ball beyond the hapless Sims to send the Iron back to Essex with the sounds of fireworks and Dartford celebrations accompanying them.

The result sees the Darts return to the top of the National League South table, as well as continuing their impressive form and unbeaten run. 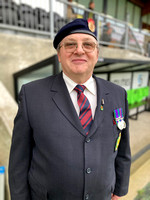 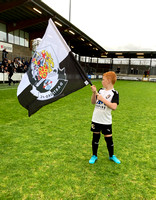 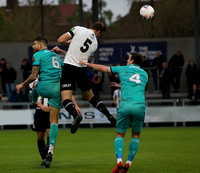