Dartford’s impressive start to the season continued at Twerton Park, as George Porter came off the bench to score late and condemn Bath City to a third straight defeat. After making a strong start to the season, Bath City’s confidence was seriously dented coming into this 95th meeting with Dartford after having lost their previous two league games. Yet, you wouldn’t have thought it as they looked to attack the Dartford full-backs with the hope of creating goal scoring opportunities. The first probe resulted in a free-kick, as referee Ross Martin penalised Jernade Meade for a clumsy challenge in the opening minute. Failing to test Dan Wilks, the Romans were then on the back-foot, as Luke Wanadio began terrorising their left-back in return. The tricky winger sent a good ball into Noor Husin, who controlled it well before setting up Jake Robinson. Unfortunately, Robinson’s strike failed to hit the target in the fourth minute. Both sides were creating opportunities in a busy first-half where both sets of wide players exploited the space on offer. Luke Wanadio and Jake Robinson looked full of confidence, whilst Elliott Frear and Marlee Francois were equally as dangerous. However, it was the hosts who struck next when Frear found Tom Smith with a neat pass, only for Dartford captain Tom Bonner to clear the latter’s effort off the line in the eighth minute. The Romans were at it again eight minutes later, as Cody Cooke managed to breach the Dartford backline. Thankfully, his effort struck Dan Wilks’ upright before proceedings turned a little scrappy until Mr Martin allowed a drinks break with 28 minutes on the clock. This appeared to lift the visitors, who took advantage of Ben Gerring’s poor header, which inadvertently sent Robinson through on the left-flank. His wickedly chipped cross found Ade Azeez in the box, who guided his header into the bottom corner (30). Azeez then returned the favour on the stroke of half-time. The move was started by Luke Wanadio, who got the better of his marker before setting up Jack Jebb with a perfect pass. Jebb sent a wonderful chipped effort into the box, which Ryan Clarke could only parry into the path of Azeez. The Dartford number 14 then unselfishly flicked the ball towards Robinson, who headed it home to double his side’s advantage. Azeez almost doubled his assists seconds later with a powerful run before setting up Jack Jebb with an exquisite ball. Unfortunately, Jebb’s drive was always rising and flew just over Clarke’s crossbar.

Whatever Jerry Gill said to the Bath City players at the break had the desired effect, because they came out like a wounded animal in the second-half in search of dragging themselves back into the game. And, they almost pulled a goal back in the 48th minute. Elliott Frear was the danger once again, as he delivered a fabulous ball into the box, which one of his teammates got a header to. Thankfully, Jack Jebb was alert to clear the ball off the line! Undeterred, the Romans continued to push the Darts back, and they came close again in the 50th minute. A fierce low drive forced Dan Wilks into a brilliant save, but the rebound was headed straight towards the goal. With Wilks stranded, up stepped Tom Bonner to clear the danger off the line once again. The visitors just couldn’t seem to get hold of the ball, let alone keep it and, with 61 minutes on the clock, Bath City had the goal they needed. As a long ball floated over the top, Alex Fletcher made a good run to receive it in the box. Twisting and turning, he got the better of both Josh Hill and Tom Bonner, before slotting the ball beyond Wilks. With their tails up, and the game perfectly poised, Bath kept coming forward, but the Darts began to get hold of the ball more frequently themselves and tried to exploit the open spaces on offer. And with twenty minutes remaining, Azeez found himself through on goal. Unfortunately, Clarke was equally alert and denied the striker his goal.

Then it was time for manager Steve King to pull off a masterstroke with his substitutions. The changes came thusly: Dan Roberts replaced Jake Robinson (72), Danny Leonard replaced Luke Wanadio (77), and Ade Azeez left the field for George Porter (81). The next three minutes proved to change the outcome of this game. Literally seconds before George Porter was introduced, the Romans should have levelled the score when Cody Cooke found himself in on goal. Dan Wilks had other ideas, however, and pulled off a good save to keep the score at 2-1. Three minutes later saw Dartford score a third goal to secure the points once and for all. With Bath throwing bodies forward, Noor Husin collected the ball before exploiting the space to feed Dan Roberts with a peach of a pass. Roberts burst into the box, squared the ball towards George Porter, who controlled it well before sending it beyond the hapless Clarke. The goal deflated the hosts and Steve King’s side controlled the ball from then on. This was no easy task to say the least. But clinical finishing in front of goal ensured that Dartford’s unbeaten run continued with five wins from five.
The attacking force of the Darts is proving hard to contain, with Ade Azeez having scored four goals, Jake Robinson three, and both Dan Roberts and George Porter having two a-piece, after just five league games. Tonbridge Angels will be the next test, as they try to stop the Dartford goal machines at Bericote Powerhouse Princes Park.
TEAMS
BATH CITY: Ryan Clarke, Ben Gerring ©, Jack Batten, Alex Fletcher, Omar Holness, Cody Cooke, Tom Smith, Elliott Frear, Eddie Jones, Marlee Francois, Josh Owers.
SUBSTITUTES: Joe Raynes, Dan Ball, Will Fuller, Lloyd James, Tom Richards.
DARTFORD: Dan Wilks, Jordan Wynter, Jernade Meade, Noor Husin, Josh Hill, Tom Bonner ©, Jack Jebb, Kieran Murtagh, Jake Robinson, Luke Wanadio, Ade Azeez.
SUBSTITUTES: George Porter, Connor Essam, Dan Roberts, Danny Leonard, Luke Allen. 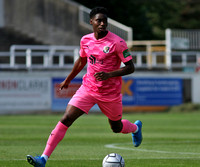