Billericay Town is a club owned by rather mercurial 'entrepreneur' Glenn Tamplin. He has owned three steel companies which have all folded owing considerable debts. On the flip side, he is reported to be worth £45 million including owning a £1million Ferrari F12 TDF. However, since taking ownership of Billericay in 2016 he has ploughed £2m-£2.5million into creating a club he believes is capable of promotion to the football league. Tamplin paid £120,000 for a 95% stake in the Isthmian Premier Division outfit last December after a failed attempt to acquire National League Dagenham & Redbridge. Life at the club nicknamed Ricay has not been the same since. Gates have rocketed from 211 twelve months ago to 4,582 for a pre-season friendly against West Ham's Under-23 side in August. Tamplin has decorated the visitors dressing room with stormy seas and sharks. His team are motivated by getting them to sing R Kelly's 'The World's Greatest' before every match. He has also introduced a lion-themed home dressing room to inspire his team. Of the ex-League players he hired, Paul Konchesky left November 2017, Jermain Pennant lasted four months, Elliot Kebbie had some "difficulties" with Mr Tamplin, and Jamie O'Hara is on an 8-match ban for punching a teenage supporter at Leatherhead after the final whistle.

Ambitious? Some reports indicate it is £700,000 in debt. He has been paying players and staff a reported £20,000 a week "no one is on more than £1000". "I will get League Two in five years, I'll have a bet with any man in the world," said 45-year-old Tamplin. "But why can't this club go all the way? Why can't we have 25,000 and be in the Premier League like Bournemouth in 10 years time? Who's stopping us?" A mural at Billericay's ground includes a picture of Tamplin in bed having his epiphany of investing in Billericay.

But since the Woking match “It is with deep regret that I have no choice but to cut my ties with Billericay Town Football Club. The club is now up for sale with immediate effect. I can take the personal abuse but now it has started to affect my health and my family. For me it has now crossed the line. When I initially bought the club, my intentions were always to leave a lasting legacy for the people of Billericay to have a great community club to be proud of, and I hope that when the people of Billericay look back they can see that I have achieved some of the intentions I set out to achieve with the club. For me the final nail in the coffin was yesterday at the Woking game where I was informed at the ground, after the match, that the police wanted to talk to me regarding a complaint from a fan that that I had been using cocaine. After speaking to the police they were satisfied that the complaint was unfounded, although angry and upset I felt that was the end of the matter. However, 20 minutes after I had left I was pulled over by the police. Bizarrely I was once again questioned regarding the complaint. This lead to my two young children who were with me becoming absolutely terrified and in floods of tears in the back of my car. Again, after assisting the police in every way possible I was again allowed to continue my journey home. This I hope goes some way to clarify the social media backlash I received from people, including Billericay fans, after my national league post-match interview with comments regarding me being ‘off my face’ etc My last actions will be to find suitable investors that will be able to run the Billericay Town and also to try my hardest to reinstate Harry Wheeler as manager of this great club. Thank you to all the fans that have stuck by me through thick and thin I will look back at the treble winning season with fond memories of a momentous time in the clubs history” - 2 September 2018. Still there on 15 September. Go figure.

There is a swish sponsors lounge, a nice "media" room with complimentary tea/coffee etc. No room behind the goals, and the pitch slopes away on one side.

On their team, Alan Julian GK used to play for us, always a nice chap. 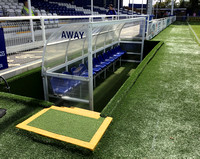 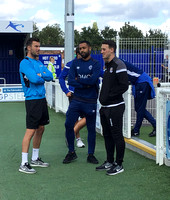 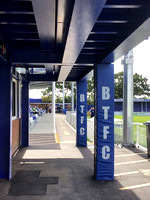 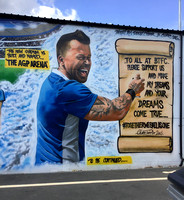 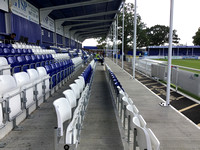 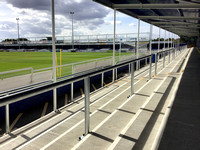 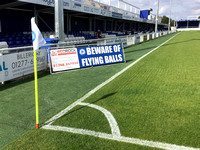 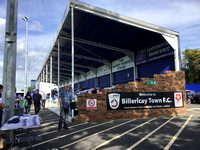 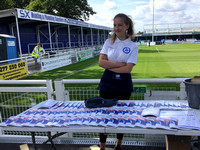