DARTFORD 3 SLOUGH TOWN 0
Dartford’s first game of the season at Bericote Powerhouse Princes Park saw them demolish Jon Underwood and Neil Baker’s Slough Town in an emphatic 3-0 victory in front of 1,004 supporters. Manager Steve King named an unchanged side, with one exception, that being striker Dan Roberts. He was rewarded with a starting place against his former teammates, after coming off the bench to score a late brace against St Albans City last weekend. Fellow striker, Jake Robinson, took his place on the substitutes bench alongside Connor Essam, Tyrique Hyde, Luke Wanadio, and George Porter.

The hosts started the game in fine form, as they dominated for long periods during the first-half. The trio of Ade Azeez, Dan Roberts, and Danny Leonard terrorised the Rebels’ defence throughout, while the engine room of Noor Husin, Kieran Murtagh, and Jack Jebb bossed the midfield. And it was no surprise to see Murtagh play his part in creating the first opportunity, after he ran past three opponents before threading the ball towards Jordan Wynter. The Dartford number two then sent a wonderful ball across the face of Jonathan North’s goal in the sixth minute, but none of his teammates could reach it. Four minutes later saw Leonard dance his way through the defence on the right flank, before sending another delightfully teasing ball across the face of goal. Ade Azeez obligingly accepted the invitation, but his outstretched foot just couldn’t reach it.

The forwards weren’t the only players keen to get in on the action this afternoon, and Noor Husin’s effort in the 18th minute, which was cleared off the line, wasn’t to be his only attempt. His next involvement in the attacking area of the pitch came in the 37th minute, but it was his body which almost became the provider. Once again, Leonard was the initial threat, as he beat his marker before cutting inside and pulling the trigger. Jonathan North made the save, but the loose ball fell to Husin. His feet proved to be a little too quick for the Slough defender, who resorted to fouling the Afghanistan international. However, before anyone had time to breathe, Jack Jebb rifled in a thunderous free-kick, which cannoned back off the crossbar! Undeterred, the hosts continued to be patient and organised when not in possession. But their attacking pace was scintillating and, five minutes later, they took a well-deserved lead. It was Dan Roberts who started the move on this occasion, as he breached the defence before sliding the ball towards Leonard. The latter squared it to Ade Azeez, who honestly couldn’t miss to score his second goal of the season.
The second forty-five was a mirror of the first, as the Darts looked comfortable and confident. Azeez should have doubled the score in the 51st minute, but his excellent header from close range forced an equally excellent save from North. The Slough goalkeeper was impressive and was forced into another save eight minutes later, this time stopping a Dan Roberts effort. However, he was unable to make the ball safe and was helpless to prevent Noor Husin from smashing the ball home to open his account of the season and double the host’s lead.
North continued his goalkeeping exploits with two further saves to prevent the visitors from being torn apart completely. With Dartford in complete control, the goalkeeper saved well from Azeez (64) and Roberts (66), but conceded a third goal in the 80th minute. The threat came from Roberts, who breached the Slough backline and found himself through on goal. Yet the former Rebel passed to George Porter (who came on for Azeez a minute earlier) and watched as his new teammate tucked the ball home to score his first goal for Dartford and seal the victory.
That assist would prove to be Roberts’ final contribution of the game, as he was substituted for Jake Robinson in the 82nd minute. And, if we travel back to the 71st minute, we’ll notice that Danny Leonard was replaced by Luke Wanadio in what was Steve King’s first change in personnel.
Meanwhile, the visitors did create some opportunities during what proved to be a difficult afternoon for them. A poor pass in the 14th minute saw Scott Davies capitalise to find Max Worsfold, but goalkeeper Dan Wilks was equal to Worsfold’s effort. Wilks was called to action again a minute later, as he got down to collect the ball before Eitel Goueth could get to it. The only other Slough opportunity of the game came in the 37th minute after being awarded a corner. Matt Lench delivered a dangerous ball, but Mark Nisbet could only volley it over Wilks’ crossbar.
Noor Husin was well-deserving of the Man of The Match award in a game which saw the Darts dominate for long periods. The result sees Steve King’s side net maximum points from their opening two games and race to the top of the National League South table.
TEAMS
DARTFORD: Dan Wilks, Jordan Wynter, Jernade Meade, Noor Husin, Josh Hill, Tom Bonner ©, Danny Leonard, Kieran Murtagh, Dan Roberts, Jack Jebb, Ade Azeez.
SUBSTITUTES: Jake Robinson, Connor Essam, Tyrique Hyde, Luke Wanadio, George Porter.
SLOUGH TOWN: Jonathan North, Josh Jackman, Freddie Grant, Mark Nisbet, Max Worsfold, Matt Lench, Tom Derry, George Hunt, Scott Davies, Eitel Goueth, Ryan Bird.
SUBSTITUTES: Lewis Pegg, Lee Togwell, Sean Fraser, Joseph Lawal, Gabriel George.
By Chris Palmer 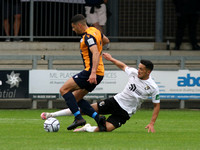 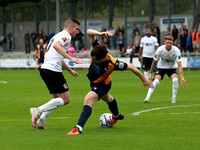 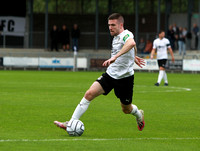 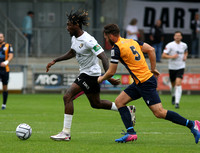