Created 2-Aug-20
85 photos
1 August 2020. Weymouth win on penalties after a 0:0 draw at full time.
Dartford lost to Weymouth in the National League South play-off final after missing three penalties in a shoot-out for promotion.

Dartford travelled to the South Coast, where they faced a strong Weymouth side in the National League South Playoff Final at the Bob Lucas Stadium on a gorgeous Saturday afternoon. Having already beaten Slough Town and Havant & Waterlooville enroute to the Playoff Final, Steve King’s side would have been feeling confident of inflicting revenge on Mark Molesley’s Terras, having lost 3-1 here at the beginning of the season. However, a 0-0 draw was served in a cagey game which saw both teams refusing to give an inch on the pitch. This was more like a game of tactical chess than football, and with promotion at stake, both defences thrived throughout the afternoon. Yet, with time running out, the lottery of penalties loomed large, and it was the hosts who got to grips with them to earn promotion to the National League.
It is fair to say that expectations were high as referee Robert Whitton blew his whistle and Weymouth got things under way. However, the early signs of a close and difficult game were there for all to see during the opening exchanges. Yet it was the visitors, in their traditional white and black kit, that created the first opportunity in the fifth minute. The fact that it came from a Weymouth attack was noted by Mark Molesley, as a Weymouth cross was intercepted and the Darts powered forward after good work by Tyrique Hyde. The first corner of the game was won, but the Weymouth defence dealt with it easily.
With the visitors looking the brighter of the two sides, it was actually AJ Sesay who proved to be the first goalkeeper to collect the ball after a Craig Braham-Barrett foul. With Mr Whitton awarding the Terras a free-kick in a dangerous position, the ball was whipped into the box, but Sesay collected it confidently in the 8th minute. Four minutes later saw Jordan Ngalo get into the box after good work from Jaidon Anthony. Thankfully, his powerful shot was cleared by the Dartford defence. After a spell of Weymouth pressure was dealt with by Tom Bonner and Co, Darren McQueen should have given the visitors the lead with 20 minutes on the clock. A terrific ball found Charlie Sheringham, who nodded it into the path of the Dartford number ten. As he fell to the ground, McQueen still managed to wrap his foot around the ball and fire it towards goal, forcing Callum Ward into an excellent save.

The Darts appeared to be the stronger of the two sides after the water break, as they created a few opportunities to take the lead. First Elliott Romain used his strength after receiving a good pass, then sent a high ball towards goal, only to see Ward clear the danger (27). Then Braham-Barrett received the ball on the left flank, beat his man, cut a great pass to Hyde, who hit the ball straight at Ward (39), before Sheringham received a long ball over the top, only to see the rushing Ward block his strike and send it out for a corner (41). Those late efforts seemed to encourage the Darts and they came out in the second half on the front foot. Four minutes in they were rewarded a free kick for their efforts. Midfielder Jack Jebb sent a long free kick towards the box, which eventually fell to his midfield counterpart, Noor Husin on the edge of the Weymouth box. He struck the ball well, but unfortunately it flew wide of the upright.
As both sides then closed ranks to shut down potential attacks, the hosts were the first to make changes, as they made a double substitution in the 54th minute. Two minutes later they gambled with a long ball over the top, trying to out-maneuver the Darts with route-one football. The gamble didn’t pay off, however, because Sesay was alert, reading the danger well. Within minutes, the space opened up on the pitch a little, as both sides created good goal-scoring opportunities. A Dartford corner in the 58th minute found Sheringham in a great position. Heading the ball down and towards the goal, the big striker must have thought he’d opened the scoring, only for Ward to deny him again. At the other end, a Weymouth corner was cleared, but collected at the edge of the box by Josh Wakefield. His shot was saved well by Sesay (59), before Ward managed to gather the ball at the other end from a McQueen effort (61) after another good nod-down by Sheringham.

As the game opened up more. Sesay was called into action in the 62nd minute, as he saved well from an excellent Thomsen strike. Bonner then prevented an attack with some outstanding defending before Mr Whitton halted proceedings for the mandatory drinks break with twenty minutes remaining. Both managers took this opportunity to make substitutions, with Steve King bringing on Ky Marsh-Brown for Sheringham. The lively Marsh-Brown would make an impact in the 78th minute, but at the other end, where he made a terrific block on the edge of his penalty area. The loose ball would, however, be picked up by Camp, who fed it towards Brooks. The latter let rip with a shot, which flew over Sesay’s crossbar, as the hosts began probing for a way through the Dartford defence. Five minutes previous to that effort saw more good work by Jebb, as he fed a great ball to Romain. On this occasion, however, the Dartford number nine was unable to breach the stubborn Weymouth defence, which managed to clear the danger. Marsh-Brown tried his very best to give his side the lead late on, as he first saw an effort blocked by Whelan (83), then saw Ward gather the ball before he could reach it (87). Meanwhile, Jebb fired wide of the post in the 88th minute, after his side had dispossessed Weymouth with some good pressing play.
Referee, Mr Whitton, was having a good game himself, as he kept his cards in his pocket throughout the match, perhaps being mindful of the occasion. However, Weymouth should consider themselves lucky to have not seen at least one yellow card, as first Murray made a late, harsh tackle on Braham-Barrett (83) and then Whelan flew through McQueen in the 86th minute. But Mr Whitton remained lenient, despite awarding the free kicks in Dartford’s favour. With time running out fast, veteran midfielder Lee Noble came on for Hyde (87), before the game entered three minutes of stoppage time. Then Mr Whitton blew the whistle and both teams were faced with the lottery of a penalty shoot-out. Whelan stepped up and slotted home comfortably to put Weymouth one-up but Jebb curled well over the left-hand angle.McCarthy made it 2-0 with a calm central finish before McQueen slashed his penalty over to put the Terras in control. When Anthony expertly crashed a finish home, Husin had to score but the Afghan international boomed an effort high and wide to spark wild celebrations from the Weymouth ranks. Weymouth would go first and would go on to score all of their opening three penalties. The Darts, however, weren’t as accurate, as Jebb, McQueen, and Husin failed to hit the target. And so it is Weymouth who will be playing National League football next season, after literally squeezing past Dartford in a game in which neither side could be separated. As for the Darts, they congratulate their opponents, dust themselves down, and go again in the National League South
Neither team could produce a goal in normal time, following a close-fought contest in the promotion final, and the Darts put all of their kicks wide of the mark when the match went to penalties.

The Darts began their league campaign on August 3, 2019, starting out with a 4-1 defeat. King took over in October with the task of avoiding a relegation scrap after replacing the departing management team of Jamie Coyle and Adam Flanagan.

Steve King, who had lost his three previous play-off finals, including last year’s game while as manager of Welling, led the Darts on a fantastic run. It ended with the club finishing inside the play-off places when the league was halted because of the Covid-19 pandemic. Unfortunately once again it wasn't to be King's day. There had been doubts that the play-offs would even take place, with debate over whether the likes of part-time Dartford could be classed as elite level. King was adamant they should return to action and with help from others, he got his way. Dartford emerged from a four-month enforced break and returned to beat Slough Town in the play-off eliminator and Havant & Waterlooville in the semi-finals, both wins earned after improved second half displays, booking themselves a place in the final at the Bob Lucas Stadium.

Striker Charlie Sheringham, who struck twice at Slough, was one of two changes for the Darts, returning as the focal point of their attack. Tyrique Hyde was also named to start as Matthew Briggs and Sanchez Ming dropped to the bench. Jordan Ngalo had an early shot blocked after Jaidon Anthony broke for the Terras while it needed a good instinctive save low down from home keeper Calum Ward to deny joint golden-boot winner Darren McQueen. Weymouth had appeals for a penalty quite rightly turned down when Calvin Brooks went down easily in the box under pressure from Craig Braham-Barrett.

The home goalie had to hold onto Josh Hill’s header from a corner in the second half. It took an hour for Dartford keeper Alhaji Sesay to be called into action, clutching Josh Wakefield’s driven effort after a corner had been cleared to the edge of the box.
Moments later Sesay made an even better stop to save low from substitute Ben Thomson, stretching out to prevent the ball creeping into the bottom corner. Jack Jebb fired a shot wide for the Darts late on which turned out to be the last effort of the game. With no extra-time, the match went straight to penalties. Weymouth had seen five of their last se 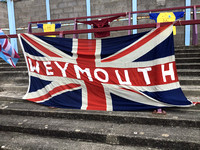 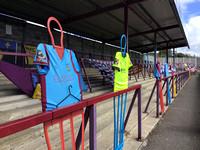 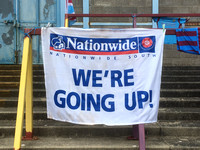 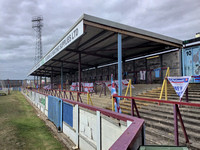 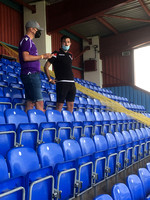 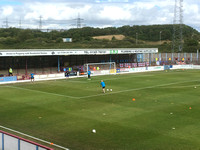 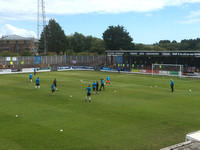