Created 10-Jul-21
78 photos
DARTFORD 0 IPSWICH TOWN 1
Football and, more importantly, fans returned to Bericote Powerhouse Princes Park on Saturday afternoon, as Dartford hosted League One outfit Ipswich Town in their first friendly match of pre-season. Manager Steve King took advantage of the friendly by naming a separate team for each half. The manager, who had recently signed a three-year extension to remain at the helm of the Darts until the end of the 2023/24 season, named five new signings and a trialist in his first eleven. This included defender Bagasan Graham, attackers Ade Azeez and Jake Robinson, and midfielders Kieran Murtagh and Tyrique Hyde. The latter, wearing the number 10 shirt for this half, returns after a season away from Princes Park, and was welcomed back. Joining the new signings and trialist in the first half was goalkeeper Dan Wilks, defender Josh Hill, captain Tom Bonner, Jordan Wynter, and Noor Husin.

A total of 1,620 fans were in full voice and showed their appreciation throughout the entire afternoon. And decibel levels increased dramatically as both teams entered the pitch to a wall of sound that has been missed for so long. Everyone came together before kick-off to give a minute’s applause in honour of Ipswich Town legend Paul Mariner, who sadly passed away at the age of 68.
The fact that this was a friendly match seemed oblivious to everyone on the pitch, as both teams exploded into life straight from the referee’s whistle, no doubt spurred on by the noise reverberating throughout the stadium. Steve King’s side made its intentions clear from the beginning, and Ade Azeez received a great ball as he breached the Tractor Boys’ defence, only to be caught offside in the opening minute. The visitors almost opened the scoring a minute later, as they burst forward with pace before feeding the ball to Macauley Bonne. He tried his luck from just outside Dan Wilks’ area with a terrific effort, which thumped the crossbar. The Darts created another opening in the third minute when Noor Husin and Jake Robinson combined well. The former fed a beautiful ball through to Azeez but, sadly, the striker was caught offside again. Matt Penney broke through and sent a low drive towards the Dartford goal in the 14th minute, but Wilks was equally as quick in getting down to make the save. Penney was the danger man once again three minutes later, as he was able to send a threatening cross into the Darts’ box. However, Jordan Wynter was alert to the danger and cleared the ball with ease.
With the visitors pressing forward, Josh Hill took advantage of the space and sent a long ball over the top in an attempt to release Robinson. Unfortunately, the new striker was caught offside on this occasion (19). The hosts were matching their League One opponents across the pitch, but just couldn’t find that killer final touch. Opportunities were created by Graham (29), Azeez (32), and Robinson (41), but the Ipswich defence stood firm.
At the other end, Tom Bonner and Co looked solid as well, keeping the visitors’ attack reasonably quiet. When the men in blue and white did look to catch Dartford on the break, Trialist #2 threw himself on the line with a late challenge to thwart the attack on the edge of his penalty area. After he had received a quiet word from the referee, Ipswich took the free-kick, but it came to nothing.

The second half saw ten changes to Steve King’s side, three of which were trialists. New signings George Porter and Dan Roberts were joined by the returning Luke Wanadio. Tom Bonner returned to the field together with Craig King, Connor Essam, Samuel Odaudu, and Jack Jebb. The visitors also made numerous changes at half-time, yet it was the hosts who increased the tempo of proceedings as they exploded into life at the beginning. The pace of the Darts was terrific, and they passed the ball confidently against their League One opponents. Trialist #19 was fed a wonderful ball by Dan Roberts four minutes in, but he fired straight at the goalkeeper. Roberts had a go himself two minutes later, as he breached the Town defence and tried to chip Tomas Holy. Unfortunately, the goalkeeper managed to tip the ball over his crossbar for the first of three corners in quick succession for the hosts. The Darts were on top during this period and were passing the ball well when in possession. The lively Trialist #19 forced another corner after breaking through (68), and Jack Jebb forced Holy into another good save from inside the area a minute later. Meanwhile, at the other end, Jesse Nwabueze sent an effort over Craig King’s crossbar in the 56th minute in a rare Ipswich attack during this period. Yet, with the hosts seemingly in control, the abilities of Ipswich Town shone through in a moment of magic. As they pressed forwards, Tawanda Chirewa collected the ball on the edge of the Dartford box and sent a curling effort beyond Craig King and into the bottom corner to break the deadlock (74). The Darts responded positively but were unable to find an equaliser. George Porter sent a long-range effort straight into Holy’s arms in the 78th minute, then Trialist #19 received a delicious through-ball from Jebb six minutes later, but sent his chipped effort wide of the upright. 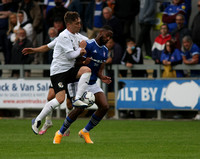 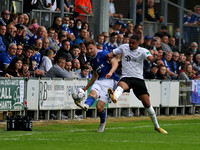 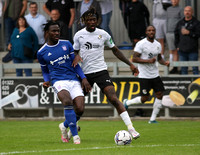 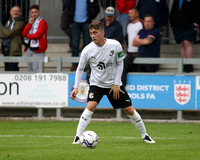