Dartford’s final pre-season friendly at Bericote Powerhouse Princes Park saw them face former League Two outfit Southend United in front of 882 supporters. Despite being the stronger side during the first thirty-odd minutes, the hosts found themselves behind after O’Shane Stewart’s 35th minute long-range thunderbolt. The goal arrived against the run of play, as Dartford looked comfortable and confident with the ball. With the midfield engine room controlling proceedings, the attacking threat came from the flanks as both Danny Leonard and Trialist #11 threatened to out-pace Southend’s full-backs. Both players terrorised the visitors’ defence and, Leonard in particular, was in scintillating form. The hosts created opportunities to open the scoring themselves as early as the 6th minute, when Leonard’s corner found Connor Essam in the box. Unfortunately, Essam’s effort failed to hit the target. Essam had a second bite of the cherry two minutes later after reaching Allen’s free-kick, but his header could only find the arms of goalkeeper Harry Seadon. Harry Seadon was almost caught out in the 17th minute, when a Dartford attack swiftly broke forward and Jake Robinson, seeing the goalkeeper off his line, tried his luck with a cheeky lob from distance. On this occasion, however, the ball descended safely over the Southend crossbar. The goalkeeper was called into action four minutes later, after Luke Allen breached the wobbling Southend defence to find himself through, only to force a good save out of Seadon. It took until the 33rd minute for the visitors to register an attempt on Craig King’s goal, mainly because the backline of Tom Bonner, Connor Essam, Jordan Wynter, and Jernade Meade were having such a strong afternoon. The opportunity arrived after Matt Rush and Sam Dalby combined well, only for the latter to fire wide of King’s post. Not that the miss mattered, however, as the Blues went ahead to that Stewart goal two minutes later.
Steve King’s side responded well and got themselves level with five minutes of the half remaining. The attack was timed to perfection as Jake Robinson received a beautiful ball over-the-top. As Robinson ran into the box, Seadon rushed out and took the Dartford striker out with a rash challenge. The referee pointed to the spot and, after receiving some treatment, Robinson duly drilled the ball beyond the goalkeeper and into the bottom corner.
Midfielder Noor Husin then had the opportunity to put the Darts ahead in the 43rd minute, but his effort on the edge of the box was easily saved by Seadon.
The second-half got underway with the hosts continuing to control the game and, once again, were creating chances within a matter of minutes. Danny Leonard’s brilliant workrate was almost rewarded as he played a beautiful ball in towards Luke Allen. However, the midfielder couldn’t find the target from close range (47). Leonard’s corner then found Tom Bonner, who flicked the ball towards his defensive partner Essam, but he failed to find the target with his strike as well (55)!
The game then took a twist as Dartford made their first two changes in personnel. Jake Robinson and Kieran Murtagh left the field to be replaced by Dan Roberts and Trialist #17 in the 66th minute and, two minutes later, it was 2-1 to the hosts! Trialist #11, who impressed against AFC Wimbledon on Tuesday evening, was at it again this afternoon. He received the ball before sending it flashing across the face of Seadon’s goal. Arriving quickly was Roberts, who met it and tapped it home to give his team a deserved lead.
More substitutions duly took place, as Dan Wilks, Luke Wanadio, Bagasan Graham, Josh Hill, and Ronnie Vint replaced Craig King, Tom Bonner, Connor Essam, Jernade Meade, and Trialist #11 (76), before George Porter came on for Danny Leonard (79). Luke Allen would also exit the pitch with four minutes remaining, as he was replaced by Samuel Odaudu.
Dan Roberts and George Porter combined well in the 83rd minute, as the former displayed excellent skill to control the ball before feeding it to the latter. Unfortunately, the goalkeeper was alert once again to keep Porter’s close range effort out. A minute later saw the visitors level the score. One of Southend’s trialists sent a dangerous free-kick into the danger area and, unfortunately, Josh Hill could only watch as his header alluded Dan Wilks and ended up in the back of the net.
The hosts appeared to lose their rhythm and concentration after the substitutions, and they almost lost the match in the dying minutes. A mistake at the back resulted in a harmless ball being put behind for a Southend corner. That was subsequently swung in dangerously and found the head of Nathan Ralph. Thankfully, his header failed to trouble Wilks as it flew wide of his upright (87).
Despite the changes in momentum to both teams, the Darts held on for a well-deserved draw against opposition from the league above. As things begin gathering momentum, Steve King’s men now travel to Sittingbourne and Lewes before league football begins again in a fortnight’s time.
TEAMS:
DARTFORD: Craig King, Jordan Wynter, Jernade Meade, Kieran Murtagh, Connor Essam, Tom Bonner ©, Danny Leonard, Noor Husin, Jake Robinson, Luke Allen, Trialist #11.
SUBSTITUTES: Dan Roberts, Josh Hill, Dan Wilks, Ronnie Vint, Sam Odaudu, George Porter, Bagasan Graham, Lucas Baker, Luke Wanadio.
SOUTHEND UNITED: Harry Seadon, Rob Howard, Charlie Sayers, O’Shane Stewart, Miles Mitchell-Nelson, Tom Davis, Terrell Egbri, Nathan Ferguson, Sam Dalby, Matt Rush, Louis Walsh.
SUBSTITUTES: Colin Andeng, Jason Demeirou, John White, Shaun Hobson, Nathan Ralph, Tom Clifford, Lewis Gard, Rhys Murphy, Karygo, Bridue, Dennis, Ricky Holmes, James Dunne, Abumere Ogogo.
Southend: Seaden, Howard, Mitchell-Nelson, Davis, Sayers (Ralph 85’), Egbri (Trialist B 62’), Ferguson (Gard 85’), Stewart (Dunne 76’), Walsh (Trialist C 68’), Dalby (Trialist A 62’), Rush (Murphy 76’).

By Chris Palmer
Images by Carol White-Griffiths and Peter White. 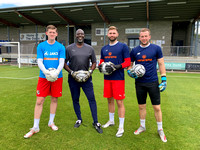 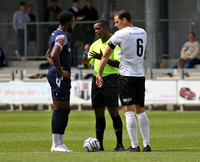 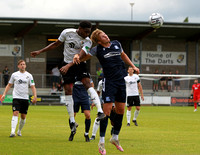 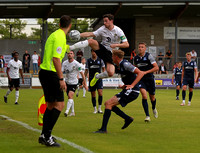 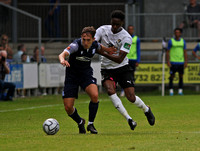