Ex-Dart Jack Barham picked the perfect time to get his first goals for Maidstone United as his hat-trick against one of his former sides helped the Stones to inflict a heavy defeat on their Kent rivals Dartford, in thrilling game at a boisterous Gallagher Stadium. This was a fantastic performance from the Stones who never allowed the Darts to get into any sorts of rhythm. Maidstone could have gone in at the break with a three goal lead after an excellent first half performance, which was full of endeavour. There was a warning for Dartford on 22 minutes when Joe Ellul, returning from injury, was inches away from connecting with a Regan Booty corner. And just 60 seconds later, Maidstone went ahead. Sam Corne started the move by sliding in to win the ball inside the Dartford half and close to the touch line. The ball went into the box and Joan Luque’s shot was blocked before it came out to Raphe Brown. His drive seemed to loop up off Connor Essam and Jack Barham reacted quickly to score his first goal for Maidstone.
Going in front seemed to really spur the Stones on and they went close to adding a second shortly after this. A header out of defence from Ellul was picked up by Luque, inside his own half. The Stones’ front man went racing down field and into the box where he went for goal and from a relatively tight angle, lifted the ball over the bar.
A poor goal kick from Dan Wilks then went straight to Christie Pattison. Pattison went into the area and got a low shot away which Wilks did well to block for a corner.
At the opposite end, Tom Hadler was called into action for the first time with 34 minutes gone. Former Maidstone played George Porter stood the ball up to the back post to Ade Azeez who headed the ball downwards and Hadler made sure it went behind. Just a minute later, the Stones should have extended their lead. A long ball forwards caught Josh Clarke out and he tried to touch it back to Wilks who had been drawn quite a way from his line. Luque was alert and nipped in but went for a first time attempt on goal which went wide. However, Maidstone did get a second on 43 minutes. Once again Corne was involved as he picked out Luque and then ran into the box. Luque managed to squeeze the ball back into Corne whose shot on the turn hit the base of the right post and Barham slammed in the rebound.

The game continued at a relentless pace after the break. Essam crept in at the back post and found the side netting before the Stones had another decent opportunity. Luque got down the left and pulled the ball back to Corne who was in space and not under pressure and his curling effort was off target. Then with 50 minutes gone, Dartford couldn’t clear their lines. The ball came to Brown whose low shot was only parried by Wilks and once again, Barham was on hand to score from close range to complete his hat-trick much to the delight of the Maidstone United fans. The visitors then threatened when Ade Azeez tried to force the ball in from close range but the Stones were back in numbers and managed to get the ball away from close to the line. And it wasn’t long before Maidstone went close again. Jermaine McGlashan found Pattison inside the box who took a touch before drilling wide. Moments later, Pattison’s rising drive looked to be going in but it was pushed onto the bar by Wilks.
As the second half went on, it was perhaps no surprise that the tempo of the game did slow down a bit. Dartford bought on Dan Roberts who caused a few issues for the Maidstone defence. First of all Roberts had a shot which flashed across the face of goal and from a similar area, a higher attempt looked to be heading in until Halder made a flying save. Then with 80 minutes gone, Roberts was in space inside the box only for substitute Taylor Curran to make a vital block. But with five minutes remaining, Maidstone rounded off a memorable afternoon. Booty’s cross from the left was met by Michael Phillips whose header looped into the left side of the net. 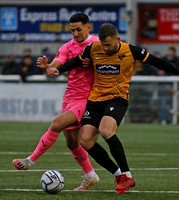 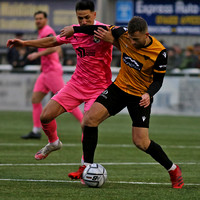 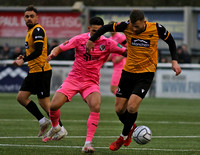 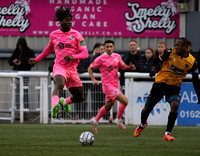 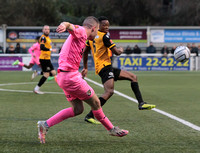 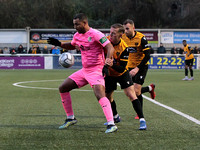