Dartford boss Steve King was delighted to collect his first piece of silverware at the club.
King took over at Princes Park in October 2019 and watched his team win the delayed 2019/20 Kent Senior Cup final with a 6-1 defeat of Whitstable Town.
Man-of-the-match was Dartford striker Jake Robinson, who has returned to the squad in the past fortnight having not started a game since the beginning of September through injury.

Two divisions separate the sides but they were miles apart on the pitch as Dartford never looked like taking their foot off the pedal.
It took just two minutes for Darts to find the breakthrough. Keiran Murtagh’s right-foot shot came back off the bar and was never cleared. Danny Leonard worked himself room on the edge of the area and sent a stunning right-foot strike into the top corner.
Whitstable’s Tom Carlton was allowed space to run from near halfway before his shot was beaten away by keeper Dan Wilks.

But the one-way traffic quickly continued. Robinson’s turn in the box ended with a fine save by keeper Dan Eason.
A needless foul on Tyrique Hyde in the box by Gus Barnes presented Dartford with a spot-kick, which Robinson tucked away to make it 2-0 on 22 minutes.
Whitstable’s Kemo Darboe did well not to follow team-mate Jake Mackenzie into the book for a high challenge on Hyde, who was intent on exacting revenge by constantly driving into the box looking for more goals.
Whitstable had chances to put more pressure on Dartford but Danny Walder wasted two corners with poor deliveries and there was nothing the Oystermen could do at the other end to stem the tidal wave of attacks.

George Porter and Hyde were both denied before Robinson slid into convert Hyde’s wayward shot on 33 minutes.
It was 4-0 on 39 minutes, Porter heading in at the near post from an attack started by left-back Michael Kedman’s driving run.
The fifth arrived a minute before the break, Hyde playing a one-two with Robinson before slotting into the far corner.
While Carlton went close with another long-range effort for Whitstable, the scoreline was a true reflection of Dartford’s dominance.
Robinson took nine second-half minutes to complete his hat-trick, curling a right-foot shot beyond the reach of Eason to add a sixth goal for Dartford.
Whitstable’s Walder showed his class just before the hour mark to open the scoring for Keith McMahon’s side. He struck an excellent right-foot free-kick over the wall and into the bottom corner from 30 yards, leaving Wilks rooted to the spot. 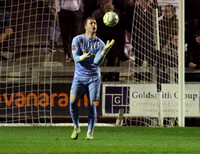