This was a game of two halves as the hosts started the first forty-five well, and, within two minutes they’d registered the first attempt on target, after Henry Ochieng fired straight at Dan Wilks. The Darts responded well, and came close themselves in the sixth minute when Jack Jebb found Kory Roberts in the Billericay box with a delicious cross. Unfortunately, Roberts couldn’t keep his header down and the ball went wide.

Dartford burst out of the blocks at the start of the second half and were ahead within seconds of the restart. Straight from the kick-off, Robinson collected the ball, delivered it on a plate for Jebb, and he slotted it beyond Oualah. Billericay were stunned, and Dartford set about putting their hosts to the proverbial sword. But goalkeeper Oualah kept his team in the game with a good save from Kalala (50), before the tricky French winger played a brilliant one-two with Kieran Murtagh, before setting up Luke Allen. Unfortunately, the Dartford number four’s strike took a deflection and cannoned back off the crossbar (51). Luke Allen was involved once again four minutes later, as he threaded the ball towards Jebb, who then picked out Marcus Dinanga with a delightful ball. Sadly, Michael Chambers was equally alert to do enough to prevent the Dartford striker from wrapping his foot around the ball. Dartford were purring at this point, and another terrific move saw Jake Robinson get into a great position only to see his effort hit Oualah’s post (63). Then Murtagh made one of his powerful runs, as his teammates passed straight through the Billericay defence. The midfielder shot, and the ball fell to Dinanga, who was never going to miss (65). 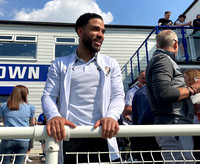 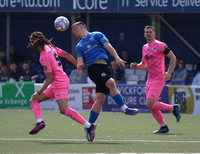 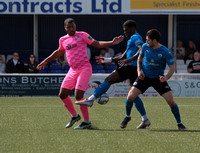 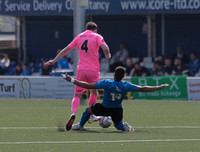 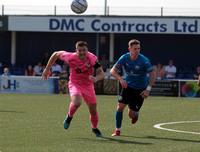 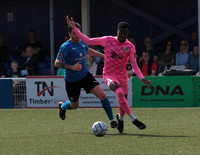