Dartford remain top of National League South after a narrow home win over bottom side Billericay on Saturday. It was a first home win in two months for the Darts but they were made to work hard by the visitors who finished the game with 10 men.
Dartford boss Steve King again opted for a three-man defence while Billericay included former Gillingham midfielder Josh Wright and rookie keeper Damian Niemczycki.
It was a debut to forget for the keeper when his early blunder gifted Dartford the lead on nine minutes. Closed down by Darts striker Ade Azeez, Niemczycki got himself into a tangle and could only clear as far as Jake Robinson who made his finish from 20 yards look a lot easier than it was.
Robinson had already headed over by that stage against his former club as Dartford made a bright start against a combative Billericay team who had lost their last six league games.
New boss Jody Brown has changed their side considerably since he took over and while they played too many long balls early on for a team without a target man, they had enough pace and skill in forward areas to ask a question of the home side.
Joe Felix beat Jernade Meade but dragged his cross-shot wide of the upright and Josh Smile’s long-range shot was beaten away by Darts keeper Dan Wilks. Only a heavy touch from Robinson after Keiran Murtagh’s precise pass allowed Niemczycki to get out smartly to thwart the danger while Smile again forced Wilks into action from distance. Meade shot over from 25 yards for Dartford after a long period of possession but they gave the ball away too often in the first half and with referee Joel Mannix at walking pace throughout, there was no tempo to the game with any restart allowed to take far too long.

Munns headed over for the visitors as Dartford failed to pick up the pace early in the second half. There seemed to be a nervousness about Dartford’s play but the visitors were unable to take advantage, Toby Stevenson heading over at the far post. At the other end, Azeez couldn’t direct his header on target and substitute George Porter saw his long-range strike deflected wide for a corner. Niemczycki’s day went from bad to worse with 15 minutes left. Connor Essam’s long clearance saw the keeper come out of his box in an attempt to clear. Robinson read the bounce of the ball perfectly and nipped in first to beat him to it, being fouled in the process.
Referee Mannix was actually in the other half when the foul took place and he then took nearly two minutes before finally producing the red card, but it was the right decision. Stevenson took over in goal for the 10 men and his first task was to beat away a long-range Murtagh free-kick. It was to prove his only work as Darts were pegged back late on, although Billericay were unable to create a clear-cut opportunity. 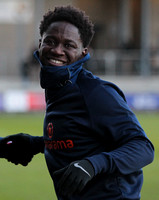 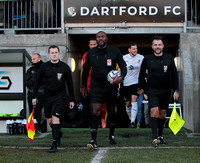 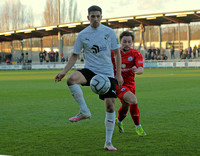 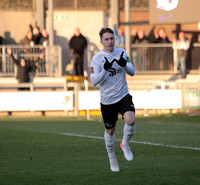 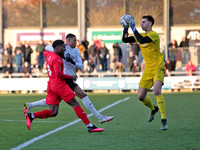 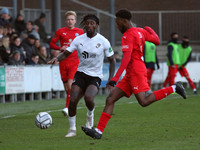