Dartford faced another tough fixture, as they entertained high-flying Oxford City at Bericote Powerhouse Princes Park on another cold Saturday afternoon in front of 1,401 supporters.

Manager Steve King was well-aware of the visitors’ recent unbeaten run of matches and the threat that David Oldfield’s side would have on the pitch. The starting eleven reflected his intentions clearly and, with many attacking options available, goalscoring opportunities were certainly on the menu. However, both defences were organised well and both goalkeepers were on form, meaning that the points were shared in an entertaining, yet goalless game. After a minute’s silence was observed to remember those who lost their lives in the wars for our freedom, the hosts burst out of the box with a flurry of pace and power. And Captain for the day, George Porter, came close as early as the second minute after breaking through with exciting pace, only to see his strike fly wide of Ben Dudzinski’s post. The Dartford number seven combined well with Luke Wanadio seconds later, as they ripped open the defence to get beyond George Harmon and Dan Matsuzaka. Wanadio got the cross across the box, and Luke Allen managed to get something on it, only to see Dudzinski make the save.

The lively start continued for the hosts, as Ade Azeez used a combination of strength and skill to beat his man and send an inviting cross into the box once again, but Dan Roberts’ excellent header sailed just over Dudzinski’s crossbar in the eighth minute. The visitors soon settled into proceedings and began to make a game of it, coming close with fourteen minutes on the clock. The opportunity arose after a good attack resulted in Harvey Bradbury attempting a cheeky chip over Dan Wilks. Thankfully, his effort hit the post to the relief of the home faithful. The Hoops tried again shortly afterwards, but the Dartford defence dealt with the threat at the expense of midfielder Luke Allen. Having been injured in the box, Allen was unfortunately unable to continue, forcing Steve King into a first change in personnel, as D’Sean Theobalds took his place (17). From then on, the hosts set about attacking but came across an in-form Dudzinski. The goalkeeper saved Jack Jebb’s free-kick (22), before saving further attempts by Dan Roberts (30) and Luke Wanadio (38), before Azeez somehow headed a golden opportunity over the crossbar from close range (45)!

Meanwhile, at the other end, Connor Essam made a superb block to prevent Joe Iaciofano from opening the scoring seconds before that Azeez miss. Oxford looked a little brighter in the second-half, and came close in the 50th minute when Iaciofano breached the defence to force an excellent save from Wilks. The hosts responded to the threat in excellent fashion, as Jack Jebb lead an attack in style before squaring the ball across the box. Unfortunately, the alert Dudzinski managed to get enough on the ball to prevent a Dartford player from poking the ball home (53). Dartford thought they’d finally got the breakthrough two minutes later after Jebb’s stunning effort crashed back off the crossbar. With the ball rebounding into the path of Azeez, the big number 14 headed it home, only for the referee, Mr Marc Whaley, disallow the goal for offside. As the game reached the 61st minute, another good Dartford attack occurred and the ball was crossed into the box towards the rushing-in Jernade Meade. The left-back, who’d be rewarded with a thoroughly deserved Man of The Match award at the end, connected beautifully with a sublime left-footed volley, only for Dudzinski to make an equally good save to keep the teams locked at 0-0. Both sides were now going for the jugular, which served up a thrilling period of end-to-end football. Jack Jebb tried his luck from distance in the 66th minute, which Dudzinski collected with ease, before Kieran Murtagh and George Porter combined well only for the former’s effort narrowly miss the target (70). Josh Hill saw a close range strike saved by Dudzinski with nine minutes remaining, before Zico Asare cleared the ball off the line after Azeez had cleverly chipped the goalkeeper (83). Meanwhile, Oxford created equally good opportunities during this spell, the first of which saw Connor Essam prevent Jacob Bancroft from getting on the end of Iaciofano’s cross with a superb, last-ditch tackle (68). Essam’s defensive partner Josh Hill then stopped Iaciofano from scoring himself four minutes later, before the hosts cleared a ball off the line after Iaciofano and Bancroft combined well once again!

As for substitutions Steve King only made one other change in personnel with Emmanuel Sonupe replacing Dan Roberts in the 73rd minute. Oxford, on the other hand, made all three changes, as Jacob Bancroft replaced Nana Owusu (58), Lewis Coyle replaced Zac McEachran (64), and Harry Kyprianou came on for Joe Iaciofano deep into stoppage time. The result sees Dartford remain at the top of the National League South table after having played thirteen matches. And, despite being without a win since hosting Hungerford in early October, they have earned a point in three of the last five games, which is certainly something positive to build on. 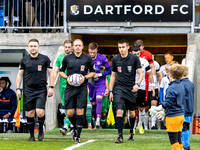 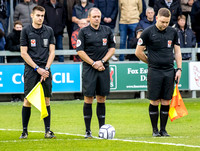 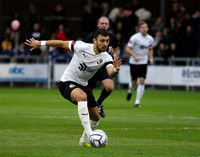 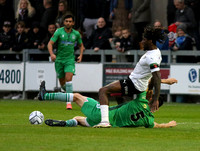 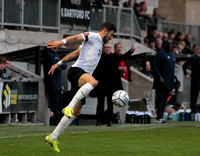