Dartford’s National League South campaign got off to a flyer, as they came away from Hertfordshire with all three points, after a Dan Roberts brace in a dramatic few minutes of additional time at the end of a tight game. There was very little between the two sides in a difficult first-half, yet it was the visitors who created more meaningful opportunities. As St Albans City’s Romeo Akinola tried to get the better of Jernade Meade on the Dartford left flank, Danny Leonard had the same idea against Tom Bender on the opposite side. And it was Leonard who proved to be more successful with his attacking play after only four minutes. The Dartford number seven drove forward with power, got the better of his man, and delivered a good ball into the Saints’ box. Jake Robinson arrived in time, but saw his headed effort narrowly miss the target. Leonard was in scintillating form during the opening minutes, and drove forward powerfully once again. Breaching the defence, the lively attacker then cut inside before pulling the trigger. Sadly, he scuffed his shot, and the hosts were able to clear the danger (8). Jake Robinson threatened to destroy the St Albans’ defence a second time, as he ran riot and combined well with Leonard and Ade Azeez. The striker, making his debut for the Darts (as were Leonard and Azeez), combined well with Leonard once again as he got on the end of another superb cross. The ball, however, had other ideas, as Robinson’s header crashed off the top of Michael Johnson’s crossbar in the 21st minute. Robinson would then see another effort saved by Johnson (22), before he tried his luck from thirty yards, only to blast his shot high over the crossbar (26). Ade Azeez was also causing problems for the host’s defence, and got the better of Joy Mukena to break into the box, only to be brought down. Bizarrely, referee Tom Danaher was having none of it and waived away the appeals (33). Two minutes later, Jack Jebb attempted one of his signature efforts, only for Johnson to save with ease.

As for the hosts? They tried to create opportunities, but came up against a stubborn Dartford defence. Despite their threat and the numerous free-kicks Mr Danaher awarded them, the closest they came to Dan Wilks’ goal was in the twelfth minute, when Shaun Jeffers sent a free-kick over the goalkeeper’s crossbar. The Saints also had possible penalty opportunities as well, but Mr Danaher was adamant that neither Zane Banton’s tumble (16), nor Shaun Jeffers’ similar acrobatics (42) were worthy of penalty kicks. A minute into stoppage time saw Steve King’s side take a deserved lead. The goal was created by Leonard, who made space for himself and broke forward to send a teasing ball into the St Albans box. And there was Azeez to put it into the back of the net to open his account for his new club. The hosts came out like a wounded animal in the second-half, but even that couldn’t quite ignite the passion in their strangely quiet supporters. With an attendance of 1,010, it was the Dartford faithful who were in full-voice. And they easily drowned out the home support from beginning to end. With the hosts on top and pressing Dartford back, the home crowd finally woke up when their captain, Tom Bender, pulled the score level in the 58th minute. After being awarded a free-kick from a Tom Bonner foul (who had actually been booked in the first-half for a late challenge), the ball was crossed into the Dartford danger area and Bender caught the opposition napping to send a low strike beyond Dan Wilks. As St Albans continued to assert their authority, Steve King decided to introduce fresh pairs of legs, as his team looked to ensure a point in this opening fixture. Connor Essam replaced Tom Bonner (65) and Jake Robinson left the field for Dan Roberts (71). Then Ade Azeez would be replaced by George Porter in the 88th minute. Meanwhile, the hosts appeared to be in control, and were searching for the winning goal. They came close in the 82nd minute, when Mitchell Weiss saw his excellent drive tipped over the crossbar by Dan Wilks.

As the game entered additional time after ninety minutes, the tide turned and the Darts found another gear. Danny Leonard sprinted away from his marker along the right flank, before sending in a dangerous cross. The ball ricocheted off of one Saint player, before hitting Devante Stanley and rolling agonisingly wide of the upright. The subsequent corner eventually found the head of Josh Hill, who flicked the ball into the direction of Dan Roberts. The substitute couldn’t miss, and he buried the ball into the back of the net to open his account for his new team. Roberts wasn’t done, however, and sealed the win in the 96th minute with an excellent solo effort. As St Albans looked to press forward for an equaliser, they lost possession, and the ball was sent over-the-top. Roberts timed his run perfectly, beat the defender, and confidently slotted the ball beyond the hapless Johnson to ensure that the Darts leave Clarence Park with all three points. And so, the travelling Darts kicked-off their league campaign with a hard-fought win against a difficult St Albans City side. Slough Town are up next, as Dartford welcome them to Bericote Powerhouse Princes Park for the first home game of the season.
TEAMS:
ST ALBANS CITY: Michael Johnson, Devante Stanley, Tom Bender (C), Kyran Wiltshire, Romeo Akinola, Shaun Jeffers, Zane Banton, Huw Dawson, Mitchell Weiss, Callum Adebiyi, Joy Mukena.
SUBSTITUTES: Liam Sole, Dave Diedhiou, David Noble, Alex Lankshear, John Goddard.
DARTFORD: Dan Wilks, Jordan Wynter, Jernade Meade, Noor Husin, Josh Hill, Tom Bonner (C), Danny Leonard, Kieran Murtagh, Jake Robinson, Jack Jebb, Ade Azeez.
SUBSTITUTES: Connor Essam, George Porter, Dan Roberts, Tyrique Hyde, Luke Wanadio. 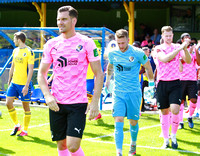 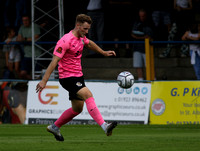 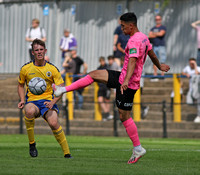 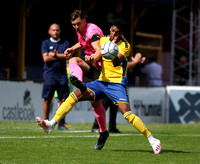 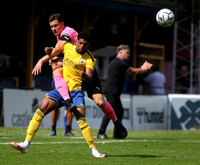 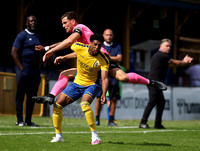